This strain is the most massive and heaviest-yielding autoflower in our catalog. It reaches a height of approximately 100 to 140 cm (3.2 – 4.5 ft) and produces a beefy, elongated central cola surrounded by side colas of modest size. Citrus-pine with notes of pepper. The smoke has a gentle, herbal aroma that you can’t fault. 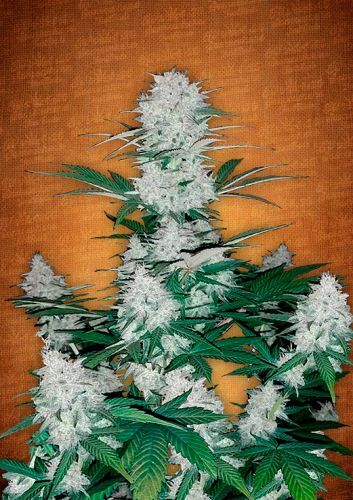 DESCRIPTION
Glaucoma, Nausea, Epilepsy, Multiple Sclerosis, Back pain, PMS, Arthritis, Herpes, Rheumatism, Sickle Cell, Expectorant, Stress, Migraines, AIDS, Tumors, Asthma
When we set our sights on the goal of creating a super productive autoflowering strain, we thought long and hard about the superior traits that our geneticists hand-picked to attain maximum results, impressively high yield and powerful effects. It exceeds that of just another “good autoflower”. Even our best flagship strains (Crystal Meth and Mexican Airlines) don’t compare to this. Much effort was put into this strain including the stabilization and potency carried by this strain. We are proud of our team for the quality of this product, but even more so for its super legit name – Six Shooter.

TASTE & AROMA
Citrus-pine with notes of pepper. The smoke has a gentle, herbal aroma that you can’t fault.

THE HIGH EFFECT
Six Shooter is always fully loaded. And the trigger can be pulled at any moment. Each toke of this slick cowboy never misses its target. Not even riding first class on Mexican Airlines and live up to this hype. The effect can be described as explosive and intense, kind of like a duel standoff in the rural Wild West. Initially, the brain takes over the pilot seat then the body gradually hijacks control of the driver’s seat. If you think your tolerance is high enough to suggest a duel with this rugged squatter, think again. Six Shooter will strike you hard and relentlessly with its unstoppable firing power. The weed is most effective for evening use. But not to worry, it won’t leave you with a sensation of numbness or heaviness.

HOW IT GROWS
This strain is the most massive and heaviest-yielding autoflower in our catalog. It reaches a height of approximately 100 to 140 cm (3.2 – 4.5 ft) and produces a beefy, elongated central cola surrounded by side colas of modest size. It’s also worth mentioning that the branch structure does a really great job in maintaining its shape and support in relation to the central stem and cola. Its bright green leaves are desirably sparse and exhibit a rounded shape. The resulting high bud-to-leaf ratio makes the process of manicuring pleasantly fast. Flowering occurs 3 to 4 weeks after the emergence of the first true leaves. It’s not every day you see such a high-yielding autoflower ready to harvest in just 9 weeks. Final yields reach a staggering 500 to 750 grams per square meter (up to 1.6 pounds per light).

Towards the end of flowering, you will begin to understand why we chose the name Six Shooter. Its dense buds, reminiscent of large-caliber bullets, are showered with white trichomes, and sport a THC level up to 21%. When grown outdoors, Six Shoter is known to have smaller elapsed harvest time with the same yielding potential. This combo is the best option for a quick harvest. But there’s more! The adaptability of Six Shooter means that it also perseveres when grown indoors, as well. Overall, Six Shooter won’t stink up the barn. But that doesn’t mean it ain’t fragrant either! During mid-flowering, a subtle citrus fragrance mingled with fine incense hugs the nose. 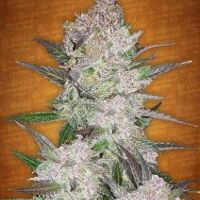 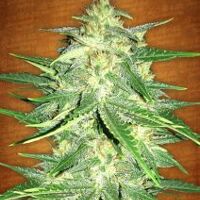 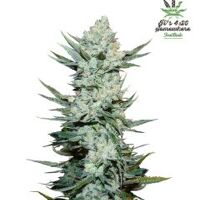