N13 Kush Feminized is 90% indica and 10% sativa. The plants are compact and bushy, with large, resinous buds. Yields are substantial, and the aroma is earthy, with notes of berry and pine. The effect is typically indica – potent, relaxing and contemplative. The strain grows well in continental climates.
Skip to the end of the images gallery 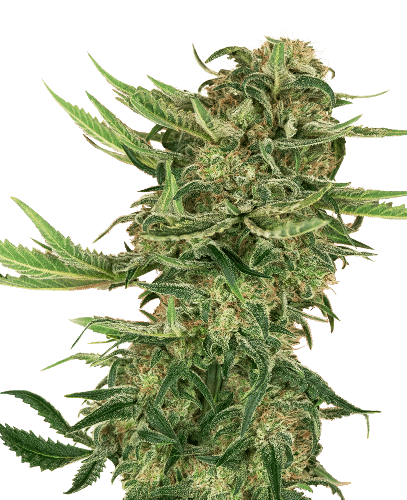 N13 Kush Feminized has a formidable gene pool, with parent plants including G13 Hash Plant and Nicole Kush. It’s 90% indica, 10% sativa, and the indica dominance comes out in the intense, relaxing stone. Like many indicas, the plants are compact with a fairly speedy flowering time.

They also generate impressive yields. Growers can expect an earthy aroma and taste, along with hints of berry and pine. Nicole Kush can be defined as a sweet and woody flavoured strain with notes of lemon that captures the dynamism and freshness of the US fields.

This strain, developed by Sensi Seeds’ researchers, has an impressive parentage. Its genetic pool includes plants like Mr Nice G13 x Hash Plant (named after cannabis icon Howard Marks), and Nicole Kush – both varieties having won awards in the past.

It’s a 90% indica, 10% sativa strain, and the strong indica genetics can be seen in the plant’s appearance and the relaxing, powerful high. The seeds are feminized, to avoid the presence of male plants. This makes it easier for novice growers, as there’s no requirement to identify and remove unwanted plants.

The strain also has a relatively short flowering time of 50 to 65 days, so the buds can be harvested fairly quickly. Like most indica-dominant strains, the plants remain compact, both indoors and out. That means they can be grown without detection with relative ease.
They’re also typically indica in appearance, with a thick central cola and plenty of bushy branches. The buds usually multiply at the nodes rather than on the branches themselves, which is another classic feature of an indica-dominant strain. When cultivated in the right conditions, the plants produce plenty of weighty, resinous buds, which result in a formidable harvest.

It’s largely the bumper yields that make this cannabis strain a popular choice for growers. The characteristics from Nicole Kush usually produce sizeable harvests, regardless of whether it’s grown indoors or outside. However, if growing this strain outdoors, it’s important to note that they require a continental climate, with plenty of warmth and sunlight.

Most cultivation techniques deliver good results with this strain, such as SCROG (Screen of Green), SOG (Sea of Green), lollipopping and supercropping.

This strain is 90% indica and 10% sativa. As a result, the aroma, taste and effect are all very indica in personality, though a hint of the sativa influence can be detected. When consumed, users report a fast-acting sense of deep relaxation and warmth, which leaves them feeling both thoughtful and inspired.

During the cultivation stage, the plants produce a pleasant earthy scent, with hints of rich berry and pine. This aroma intensifies as harvest-time approaches, and during the curing process. The taste is a perfect balance between the sweet flavours of Nicole Kush and the popular hashy one of Mr Nice G13 x Hash Plant, with notes of berry still very evident. N13 Kush brings together the best of US and Sensi Seeds genetics.