Just like the original, plants grown from these seeds are a fabulous combination of solid indica yield and resin production, and exotic sativa high and flavours which thus far, no other cannabis seed strain has managed to surpass.

The trichome covering is so thick on the buds that they can appear silver-white, and extends over the small ‘sugar’ leaves and even to the nearest fan leaves.

This is especially beneficial  for people making hash or butter from trimmings.

Original Jack Herer has delighted growers and consumers for well over two decades, picking up numerous awards along the way. 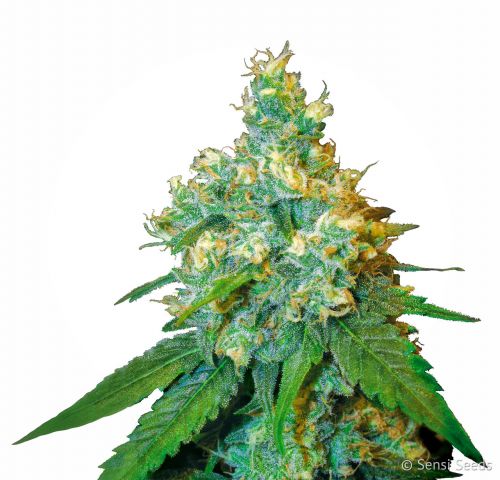 Whether you’re interested in medicinal marijuana or just looking for the finest cannabis there is, Jack Herer Feminized cannabis seeds have everything a grower could want in an indoor strain. This hybrid’s complex balance of sativa and indica qualities produces exquisitely structured buds with a fantastically dense coating of cannabinoid-rich resin glands.

Jack Herer Feminized cannabis seeds live up to their name. If you know anything about Jack Herer himself, you’ll know what an important name that is. If you’ve ever grown the indoor cannabis seed strain which Sensi Seeds named in his honour - or even just sampled a small amount - you’ll know that Jack Herer is one of the finest sativa/indica hybrids ever created. Jack Herer Feminized seeds make our best recreational and medicinal cannabis variety available to more people, by making this strain easier and more manageable for indoor growing

As with the parent strain, Jack Herer Feminized seeds produce a range of phenotypes, most of which show strong sativa growth characteristics backed up with the bulky flowering and resin production of the best indicas. The majority of phenotypes are expected to gain a lot of height during the flowering period, while also filling their tall frames with long, solid buds that display both sativa and indica qualities.

Approximately one in four plants grown from seed will have a more indica influenced growth pattern, with less height increase during blooming, and large, dense knots of bud which cluster at each node instead of running along the branches.

Sativa influenced plants will, at minimum, double their vegetated height during flowering and are more likely to triple in size. Indica phenotypes grown from Jack Herer Feminized seeds will normally gain 75% to 150% of their pre-flowered height as they bloom.

Jack Herer Feminized buds are made up of unusually large calyxes, with the indica dominant plants producing some of the biggest we’ve ever seen. The main buds of our favourite sativa phenotypes are composed of long strings of fat, resin covered calyxes that twist together from numerous budding sites, giving a beautiful braided appearance to the large colas. The plants with heavier, indica influenced buds look more ‘bubbly’, as the calyxes grow very thickly around each node, then swell in size and stack on top of each other - growing towards the light source rather than along the lateral branches.

When flowering Jack Herer Feminized seeds indoors, most plants are ready for harvest after 10 weeks, with some of the more sativa leaning phenotypes requiring up to 12 weeks’ flowering time. Indica dominant plants can produce a harvest of mature flowers in as little as 8 weeks, though growers usually choose to give even their fastest examples the full 10 weeks, in order to maximise yield.

Jack Herer Feminized plants produce a low aroma during the indoor flowering period and still have a delightfully rich bouquet and flavour when dried and cured. Most buds have the complex spicy-acrid scent of Haze, which mingles with varying levels of earthy Afghan indica and fruity Skunk cannabis aromas, depending on phenotype.

Well grown Jack Herer Feminized buds have an amazingly thick coating of resin glands. A sparkling blanket of THC- and CBD-rich trichomes covers the flower clusters, as well as the single bladed spear leaves that grow from them and even some of the larger fan leaves. This diamond-dusted appearance is maintained in the dried buds, making them as delicious to look at as they are to consume. Under magnification, a single dried calyx seems to be composed more from clear resin glands than from green plant tissue.

The trait common to all phenotypes grown from Jack Herer Feminized cannabis seeds is a dazzling double-edged potency, with both sativa and indica very strongly represented in its effect. The two sides of the high achieve a sublime balance that’s enormously potent without being overwhelming. This strain’s golden, uplifting cerebral high is underlaid by a breathtaking body-buzz with seismic power. Be prepared to feel the earth shake beneath your feet as your mind soars in the stratosphere!

The original Jack Herer strain was selected for the official medicinal cannabis program of the Netherlands as a prime example of a high THC strain. Jack Herer Feminized cannabis seeds are also suitable for a range of medicinal applications. Our only caveat is that medical users seeking a high-CBD cannabis variety with minimal psychoactive effects should probably look to a different strain.

It’s been well over 20 years since Sensi Seeds named this outstanding cannabis seed strain in honour of Jack Herer and over the decades we’ve noticed that our beloved creation makes a very strong impression on people! Most growers who have cultivated this seed strain and most cannabis connoisseurs who have sampled the genuine article will rank Jack Herer among their favourite strains of all time. Jack Herer Feminized cannabis seeds make our classic hybrid easier than ever to grow!