Kalashnikov Seeds sure didn’t earn their good reputation just from cloning existing strains. These oldschool breeders from Russia are true experts in AK-47 cross breeding and present to us a superb variant that shines with enormous robustness so that you can grow her easily in colder climates. This Kush is tough like a Russian but it’s also super potent and shines with great yields! 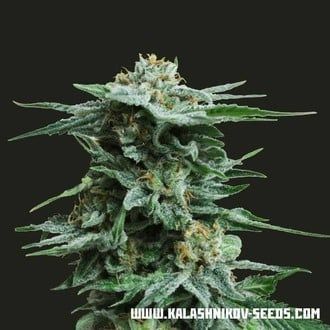 If there is a group of breeders who know the AK-47 like no other, we’d likely vote for the guys at Kalashnikov Seeds from Russia before anyone else. These oldschool cannabis enthusiasts, some of them Soviet Army veterans have many years of experience with breeding AKs and sure know how to bring out the best of the strain. The guys say that AK Kush is easily one of their best indicas.

For this cross breed to make a Kush/AK-47, Kalashnikov Seeds took a Crimean indica grown in the Kuban region of Southern Russia and paired her with an Afghani Kush. Out comes an incredibly hardy plant that can take even some of the harsh Eastern European climate where she’ll do well with yields of up to 550g/m² indoors and harvests of up to 1400g per plant if you grow her outdoors. AK Kush’s flowering time is a pleasantly short 50-60 days which is another plus when you grow her.

If one thing is for sure it’s that this tough 85% indica isn’t easily impressed – no surprise given her heritage. Mould doesn’t really faze her and she’ll also be resistant against fungal diseases. She brings some substantial growing vigour to the table while being pleasantly undemanding which makes her also an excellent choice for less experienced growers. With an average height of 80-100cm she makes a good figure no matter where you grow her and you won’t heavy to worry about her getting out of control.

If someone would still need proof for their AK Kush being an outright fantastic creation, all they need to do is smoke her. As you’d expect from a good Kush, this is a super potent smoke that’ll hit fast and where the effect will last a very long time. She delivers a deeply relaxing, if not outright narcotic effect but one that also comes with a good cerebral buzz. Some of her phenos have measured a whopping 20% of THC which can also tell you something about her medicinal potential. This is a very good smoke also for those medicinal users who want an effective and reliable help with treating all sorts of health conditions including chronic pains or sleeping troubles.

AK Kush by Kalashnikov Seeds is a Kush that combines the best from Afghani Kush and the AK into a spectacular strain not only when it comes to some serious potency and an exceptional taste. Everyone can grow this highly rewarding strain which means that even new growers can look forward to grow some serious AK/Kush goodness without any hassles.